The success rate for the Catalina Channel is 95%.  The sea temperature is about 17 to 18 degrees with reasonably sheltered waters and no great threat from jellyfish. Plenty of talk about great white sharks but to honest we had a better chance of falling foul of a plane crash on the way over. As it was our third Channel crossing we were all pretty confident  of a successful crossing.
We arrived at the boat (The Outrider) around 7 pm with all our gear and groupies (Leah, P J, Kate and Heike). We expected PJ and Heike to kayak but there was lots of confusion re kayakers so Heike and P J had to fight it out for a position on the boat. Guess who won!
The journey out to the island was rough with one of the kayakers and an observer getting seriously sick. Most of us tried to get some shut eye largely in vain. Still it was nice to lie down for a few hours.
We arrived at Catalina Island at 10.30 pm and manoeuvred  into place. It was pitch black with a slight illumination from the moon. Fish were hopping out of the water into the lights of the boat; the sea was calm and it all looked as it should for an enjoyable swim.
Just as an aside, Heike and I had a bet on the swim time for an expensive bottle of wine. I predicted 12 hours and Heike 13 plus. James readied himself, jumped into the unknown and swam to the shore. He walked up the shore line past the tidal mark and waved his hands. At 10.50 pm, clocks were started and the third channel crossing by the Wexford Masters relay team began.
James found it difficult to get direction at first (he finds that hard enough in daylight), but progressed well in relatively calm waters. As we moved out of the shelter of the island however conditions changed. The wind picked up and you could just see the huge swell in the moon light with plenty of chop.
Enda followed James giving a high five as the change over. The boat was quite unstable with the kayaker having serious trouble keeping up with the swimmer. You could see from the boat every time the kayak rose to the top of the swell that the kayaker lost control and was pushed in the wrong direction by the wind.
Myself and Enda exchanged. The water was beautiful but conditions were awful. It really was like being in a washing machine. I was struggling to get a rhythm and never did for the entire hour. Swimming in the dark is so disorientating, but with the swell, chop and wind I felt I had done nothing for the hour.
I tried to hi-five with Saskia but she went for a butt feel instead (that girl is weird). I felt sick once I got out and was quite disappointed when Enda told me we had covered less than 9 km in the first 3 hours. I think it was the thought of having to loose to Heike that was making me sick.
There was no talk of how bad the conditions actually were when you got out.  Interestingly Denise really enjoyed swimming in the dark. She said her hour was more like 10 minutes. I think she can go in the same category as Saskia.
We changed the order of the team putting Sandra last hoping she would get to swim in daylight. No chance, nevertheless she just jumped off the boat and swam like a good thing for her hour. We all enjoyed the spectacle of the bioluminescence (a beautiful display of colour with every stroke and breath).
Daylight approached for James’ second swim but conditions remained the same, although we all found it much easier to handle. Progress was much more apparent in our second hour. Everyone swam out of their hearts. We saw lots of dolphins but not much more apart from the fin of what looked like a shark during Saskia’s swim but it turned out to be a sun fish which looks a bit like a sea lion with fins.
Sandra got in for her final hour. We thought there was still 3 km to finish. She had a current behind her. Still it was a lot of ground to cover. The excitement on the boat was massive. With 10 minutes left of her swim it was obvious Sandra was going to finish this epic journey. We were all allowed enter the water including Heike who had completed 2 hours on the kayak. We carefully kept behind Sandra and let her walk onto the beach so the stopwatches could be stopped.
What a feeling, all of us together on the beach achieving a dream none of us thought possible four years ago.
Unfortunately, Kate, Leah and P J didn’t get to the beach on time to see the finish due to traffic but were waiting at the port with two welcome bottles of Champagne donated by a very generous anonymous Irish fan of the team and especially Sandra.
11 hours 56 minutes and 25 seconds. Third Channel complete.
A huge thanks to all our friends for all their best wishes.
A special thanks to Kate, P J, Leah and Heike who have played no small part in this successful crossing.
Previous
Next

The team then took part in the Trans-Tahoe Relay a few days after they completed the Catalina Channel. 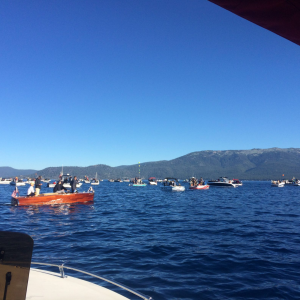 Read About The Trans-Tahoe Relay